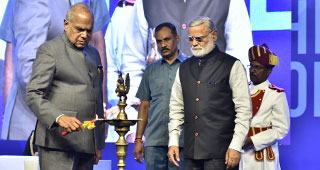 
We're back for the eighth year running! The biggest and most widely attended education conclave in the country and one of the flagship events of The New Indian Express (TNIE) Group, the ThinkEdu Conclave, is back in style.

Get set for smartly curated, deeply insightful and extremely provocative debates from India's biggest thinkers and doers. The theme for ThinkEdu Conclave 2020 is an idealistic one: India at 75. Who can see the future? That's for you to find out as we embark on one more cracker of an edition.

The TNIE Group has been organising the national-level education meet since 2013. Our previous speakers have included the late President Dr APJ Kalam, former Vice-President M Hamid Ansari, Union Ministers, Chief Ministers, policymakers, educationists and edupreneurs, along with social scientists and spiritual leaders. All our previous editions were extremely impactful.

What are you waiting for? Let's ThinkEdu !